A downloadable game for Windows

Ball 20x2 is a game where you run around in a room and collect little stars…
but watch out. those cute little stars have a secret... each and every one of them has a little monster inside, who wants to kill you!

Made in just under 20 hours (most of it was wasted time so more like 15 hours) for the GM-20 Game-Jam and is my technically first published game despite the number of years i spent developing games in my free time.

--[ KEYBOARD CONTROLS ]--
-[ESC] to go the options menu, there you can .turn off and on the enemies of your liking.
-[Arrow keys] to move your little ball friend about.
-[Space] to go into slow-mo.

I hope you enjoy, please tell me what you think.

[notes about the post jam version I'm working on]

It fixes a few bugs mostly relating to sounds and debugging features that wasn't turned off before release as well as it being the latest version i mistakenly uploaded a slightly pre-final build so you should have a lot less bugs now than the jam version. and YoYo if your reading this your free to decide if the quick-fix one should be counted as in jam time due to it not being uploaded in the time (but being 100% made in jam time) allowed but anyone else ild 100% recommend playing the fixed build. its much easier on the ears. this is not to be confused with the quick-fix versions that are small bug fixes i made after the jams finished.

I'm a bit late but I have a few ideas to make the game more exciting. i think you should add something to prevent people from sitting at the beginning a waiting for a bunch of stars to spawn before getting all of them before enemies spawn. I don't know how you could fix that, maybe just makes enemies automatically spawn if there are more than 3 stars on the board at once maybe? Another suggestion to make the game more high skill is adding someway to destroy enemies. A cool idea I thought of would be to maybe add some form of object that by running into you could knock into enemies which could explode on impact with a wall or something, but also make them fatal to the player. Great game, and I'd love to see more added!

thanks for the review and the feedback, but i cant say that ive been working on this game as much as i would have liked (other projects on the way).

the game was also planing on being much more rogelike-ish, you have multiple rooms and to open doors you have to get a set amount of stars, in our design documents each level will end off in a small boss battle (very much like how bindings of issic does its levels).

overall i do still adore this game and it's almost embarrassing that i spent months on games that are nowhere near as fun and easy to pick up as this 20 hour game jam game but also you sort of have to be careful not to give into feature creep with such a minimalist gameplay cycle (being based on probably my first ever playable game).

Fun Game. I liked the visuals, especially the shadow effect

Thank you I'm very glad you enjoyed the game. <3 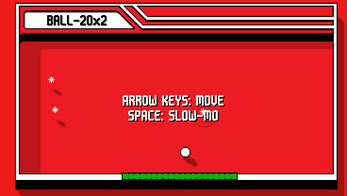 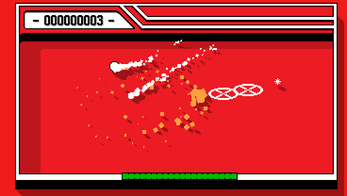 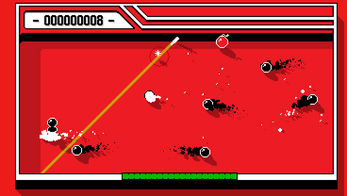